Nigeria at the moment does not yet have a high adoption of renewable energy, most of its residents still rely on diesel and petrol powered generators to compliment the unstable energy they get from the national grid. But there is a growing demand for standalone solar solutions as the prices of solar panels continue to fall globally. As welcome as this development is , more toxic lead acid batteries - a major component to stand alone solar solutions – will end up at dumpsites across the nation after their use. In this article, Kelechi Ekwegh analyses this looming threat and investigates how Nigeria is currently handling this toxic waste from lead acid batteries

Lead-acid batteries are used in millions of lorries, automobile vehicles, and motorbikes. Aside from exhaust pipe emissions, lead batteries have the most detrimental environmental impact on any part of an automobile. Lead batteries are also widely used for forklifts, golf carts, and backup power in the computer, solar, and telecommunication industries. There is immense growth in the demand for lead batteries in developing countries. As the cost of solar panels and batteries continues to fall, the potential for renewable energy to raise the standard of living in the developing world is becoming a reality, however, this comes along with the environmental cost of Used Lead Acid Batteries (ULAB). Eventually, these batteries wear out and need to be replaced. The batteries contain a large amount of lead either as solid metal or lead-oxide powder. An average battery can contain up to 10kilogram or about 22 pounds of lead. The current selling price of lead is about $1.14 per pound (or $2,504 per ton): because of its economic value, lead-acid batteries are often times recycled, in Africa mainly by the informal sector. However, the lead-acid found in batteries is toxic and causes a wide range of negative health effects.

According to the World Health Organisation (WHO) report in 2009, lead poisoning accounts for at least 0.6% of global diseases. The Blacksmith Institute considers lead pollution as one of the world’s worst pollution problems. Inefficient production and recycling operations of ULAB release tons of lead into the environment. During battery manufacturing and recycling operations, lead is melted and resulting fumes are released into the air. This toxic metal is then available for human absorption while airborne, before settling in dust and soil. Lead contamination persists in dust and soil and is often the most significant route of exposure to young children who generally play close to the ground and have regular hand-to-mouth contact. In addition, environmental contamination of ground and surface water may also occur. Lead from these sources is bioaccumulative and has significant adverse impacts on all species. In most Western countries, the problem is almost contained. However, in developing countries with little or no regulation on used lead-acid batteries such as Nigeria, and Senegal, there are devastating lead epidemics, most of which are unregistered.

In 2008, Blacksmith Institute was called to Senegal after the deaths of 18 children under the age of five in the Dakar neighbourhood of Thiaroye-Sur-Mer. The children were exposed to deadly lead dust due to the informal recycling of used car batteries. Until recently, the main economic activity in Thiaroye-Sur-Mer involved the haphazard melting of car batteries to reclaim the scrap lead inside. Because this activity was conducted informally, out in the open air, and largely by women of the community, the children of Thiaroye-Sur-Mer were particularly vulnerable to lead poisoning. The Senegalese government ran blood tests on their relatives and their mothers and siblings were found to have lead levels of 1,000 micrograms per litre. Just 100 micrograms per litre are enough to impair brain development in children.

In Nigeria, the worst outbreak occurred in Zamfara in 2012 where over 400 children died because of exposure to lead caused by gold mining, and thousands more now have their brain-damaged and disabled. While the government of Nigeria is yet to activate remedy to the lead exposure via mining, the country sits on more than 110,000 used lead-acid batteries; most of which are poorly managed, recycled and exported informally without adequate regulation. 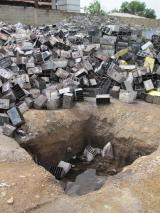 According to the report “Generation of Used Lead Acid Batteries in Africa” published by the Oeko Institute, in many African countries, the recycling of lead-acid batteries is economically attractive because of its high lead content.

Recycling lead by melting down used batteries (also known as secondary smelting) is a profitable business throughout the world. Old lead-acid batteries are increasingly reused as some nations lack lead deposits and the rising number of cars is driving an upsurge in demand. Improving recycling practices will provide significant energy savings and result in fewer greenhouse gas emissions. Recovering lead from used batteries is much less energy-intensive than producing primary lead from ore – using approximately 39% less energy than that needed to produce lead from mining and resulting in a 39% decrease in greenhouse gas emissions. Recycling lead used in batteries improves the utilization of the metal, reduces greenhouse gas emissions, and saves energy.

However, a field study from the Oeko-Institut on the informal lead-acid battery recycling chain in Ghana found that persons involved in the collection and transport of lead-acid batteries drain the contained acid prior to transport by opening the plugs or punching holes into the case and dug ground holes. Due to the toxicity of lead and the sulphuric acid of the batteries, this causes massive lead contamination of soil and groundwater. Besides, batteries are manually broken to extract the lead scrap which causes massive emissions of highly harmful lead dust. This situation is not different in parts of Nigeria like Lagos, Asaba, Onitsha, Kaduna, Ibadan or Ogun State where many metal recyclers and smelters actually conduct their businesses in very dirty ways. 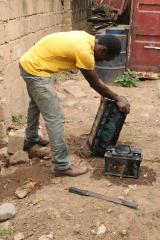 With over 110,000 tons of used lead-acid batteries generated in Nigeria annually from automotive batteries and alternative energy battery systems - according to research carried out by the Recycling and Economic Development Initiative of Nigeria (REDIN) - there is an urgent need for the Nigerian government through her environmental ministry and agencies to wake up to this reality, and speedily put in place instant policies to regulate the ULAB sector. This is more pressing as the Federal Ministry of Environment confirmed that Nigeria does not have a policy to regulate used lead-acid batteries in the country at a training workshop on “Environmental Sound Management of ULABS and the Application of the Benchmark Assessment Tool (BAT) in the context of the Implementing the Basel Convention”, on Friday 20th October 2017 organized by Heinrich Böll Foundation Nigeria, in collaboration with REDIN, Clean Tech Hub, Oeko Institut Germany and the Renewable Energy Association of Nigeria (REAN) 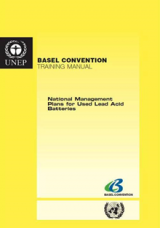 The good news is that while the Nigerian government doesn’t have to take all the years and bureaucracy to develop a new policy on ULAB, its signing to the Basel Convention and following ratification in 1991 and 2004 gives the country the advantage of simply adopting or best domesticate the UNEP’s Basel Convention Training Manual for the National Management Plans for Used Lead Acid Batteries. The manual also provides for holistic field monitoring tools like the BAT, after training the regulating officers on the assessment process. Its full adaptation and implementation become more urgent when considering the country’s recent expansion in clean renewable energy technology. This will mean a massive increase in the number of used lead-acid batteries in Nigeria.

Anambra State in Nigeria, surprisingly, currently houses one of the cleanest lead recycling facilities in West Africa, if not the entire continent; according to ILA-certified inspectors. With a facility having a closed-loop system to ensure minimum environmental pollution, and health mechanism for workers put in place, the Nigerian government should encourage such formalized and standard recycling processes as this would not only create new cleaner jobs for the unemployed youths but also accelerate the production of made in Nigeria batteries. Such encouragement can be in the form of tax holidays; in setting a ULAB export quota to ensure that clean formal local processors have enough ULABs for their production chain before export; as well as in ensuring through the Ministry of Environment that dirty and informal smelters are strictly regulated to either improve up to the required standards or to shut down. Federal and state governments should examine and replicate the successes of this recycling facility.