Aliyu: What inspires your work?

Mbewe: It comes from the desire to insert myself where, originally, people like me – queer black women – have not been inserted. For the majority of my childhood, I was just reading books with no context to race, gender and whatnot. When I was 18, I decided I was going to write a novel. I read fantasy novels written predominantly by white women and was like, “Let me do this, too. I can do this.” I started writing and I was writing about people that did not even look like me. It was weird, so from that moment onwards, it became about recreating, reshaping, reimagining. Also, the feeling of remoteness inspires me – feeling alien, feeling placeless – and that’s I think where I mostly write from.

What is Afrofuturism to you?

Initially, I and other people I know went around calling ourselves Afrofuturists. We’re only now trying to detangle that identity. Over time, I started feeling uncomfortable calling myself an Afrofuturist. There have been criticisms about Afrofuturism and how it was coined by a white man. Even though Africans have been producing speculative content for years, it’s like we waited for a white man to just name it. Speaking with my friend, spoken-word performer Philipp Khabo Koepsell, recently, we noticed that the prefix “Afro-” is the label used all the time to describe anything done by black people. Why can’t we define things ourselves? I think we should rather be talking about “pan-African futurism”, a term I coined for my exhibition, Afrofuturist Village.

It is a place that is rural and remote, where distinct and strong characters exist. It is removed from the typical futurist imagery of Africans in space, of technology, etc. We always sit around and talk about these things as if in a bubble. Afrofuturism is a very classed concept. It is for the classed black person who has access to information, myself included. I needed to take all black people along. The concept behind the exhibition tackles issues of language, gender and identity. For example, I included an excerpt from one of American poet June Jordan’s theories on language that asserts that whoever “owns” a language gets to decide how it’s used, how it shapes things and how they can “weaponise” it. In response, I invented a language that my characters could use so that they were in full control of their futures. I took pictures in places that I think Afrofuturism needed to be inserted, spaces that are remote but futuristic. As much as we want to say we’re going to space, there are spaces on earth, in Namibia, that are out of this world. Because the exhibition was conceptualised as a village, I also decided to have a traditional healer there. I was exhibiting at the German Goethe Institute in Windhoek and thought it was important to first cleanse the space, as Namibia and Germany have this strained relationship due to the Herero genocide and ongoing conversations about reparations for all of the damage and trauma that was left in its wake.

Tell us more about your idea of “pan-African futurism”, or “post-Afrofuturism” as you have called it elsewhere.

Afrofuturism can be very one-dimensional. Globally, the African diaspora is having different experiences, even though we’re all black. There are different places where we intersect, but there are still marked differences. Most of my travels have been around Africa and I’ve lived in various African countries, so, for me, it’s about pan-African futurism. It’s based on my experiences in these spaces, based on my exposure to the folklore and mythology of different African spaces and how they’ve affected my life. But it goes further: for me, the aesthetics associated with Afrofuturism – black people in space, spacey landscapes – is not enough. In the future, when all of us have gone past whatever we’re going through right now, the colonial remnants and whatnot, there should be no concept of gender or race. All of these things should be dismantled. Spacey stuff is cool, but I don’t have the budget to take photoshoots with that theme. But with my photography, I was able to show there’s queerness in the future, and that’s what I wanted to talk about the most. Afrofuturism is still very heteronormative, with the exception of a few people. Even if we talk about Black Panther, the patriarchy is there. For me, a pan-African future is one where everyone is free and equal. The Africa we’re living now, for those of us who are black and queer, that’s just not happening.

What keeps bringing you back to futurism?

I think I was born into it, if that makes sense. Even if I say I quit, I’m still there. I’m still thinking in those terms. It just never leaves me. It’s injected literally into every single thing that I do. People ask me to do multiple things and it’s always there. I try to leave; I try to write in other genres. Even if I write a story about a girl who walks from here to the store, aliens have to be there. It would feel incomplete otherwise. That’s how it is, how I’m wired, I don’t know how else it could be. If I look back to some of the compositions that I wrote when I was 16 years old, I always made things weird for no reason.

You are a writer and a photographer. How do you choose which medium to tell your story in?

It depends on what the story is. For something like an exhibition, obviously, I can’t just write. It depends on what I want to communicate. If it’s an extremely visual project, then photography is the way to go, and if it’s something descriptive or personal that I’m trying to get across, I’m going to write. But the two complement each other; it’s like part of the same machine. I have to sit down, write, and conceptualise photo shoots. For me, without writing first as a foundation, I won’t be able to take photographs and tell a story visually. It would be impossible to translate what I’m thinking and the things I see in my head to something visual. The exhibition that I had would have made sense as a collection of short stories, but I had an opportunity to work with a lot of great people to create something visual, which is what I did. I utilised different mediums, including film.

How do you come up with your characters? In your stories, they can be quite dark, but in your art, they are colourful. Why the difference?

With my photography, I collaborated with other people. The designer had a different interpretation of Afrofuturism. It was the same with the videographer I worked with, you know: people have different perspectives. Personally, for me, the future is actually bright, as corny as that sounds. With my writing, it’s personal, right. You write sometimes and you don’t think anyone is going to read it. Of course, you’re going to create characters that are outlandish. It also depends on the story, what characters are needed to make this story work or to make it make sense. For example, my short story “Alien Control” started with my experiences at Home Affairs. In my passport right now, there’s a stamp that says I’m allowed to be in Namibia for a certain period of time, Alien Control Unit, etc. I’m a human being! I’m an African in Africa but I’m considered an alien. I feel very alien. People don’t hide how they feel about foreigners. It’s not a secret that we are subhuman to some extent, we don’t have a lot of rights. I’ve been through so much, particularly in terms of working in a country where people will blatantly use the fact that you’re a foreigner against you. It’s every immigrant’s story. So the character of the alien who comes through and destroys everything was me. I was actually standing in line at Home Affairs with a friend of mine: that’s one of the characters. I overheard some of my peers in primary school talking about makwerekwere [derogatory slang for immigrants] and how dirty and disgusting we were: that’s one of the other characters, the parents actually. That’s my only point of reference, really, what’s happening with me. The story is based on things that happened. You know when you’re young and weird stuff happens to you and you don’t notice it? Then when you grow up, you’re like, “That was weird. I’m going to write about it.” A good friend of mine once told me, “If a good idea comes to you, go.” But if a good idea comes to you and you just sit on it, someone else is going to write it. There’s a myth, a belief, that says stories travel from writer to writer until they find the correct person to get the story out. I totally believe that because I’ve sat on stories before and next thing I know someone else has won a short-story prize with a skeleton of the idea that I had.

What’s the future for your work and Afrofuturism?

I predict Afrofuturism is going to peak and plummet back into obscurity. When you look at the success of other genres, it’s the same. Twilight and vampires peaked and plummeted. Harry Potter is a great book, but fantasy novels aren’t as popular as that series was. Fantasy novels were very big for a bit, then they plummeted because it is a niche market. When the gig is up, the gig will be up. People who are only reading books just to seem cool and be part of the trend will stop reading the books. I’m sure there are thousands of African writers that write speculative fiction but there’s only room for ten. That’s why it’s important for those of us who are about this and who have been about this before it peaked to start thinking of the future. We need to start thinking about pan-African futurism. On the other hand, if we’re being optimistic, Afrofuturism and pan-African futurism will be a completely normal thing and all of us are going to be published and we’ll be okay. 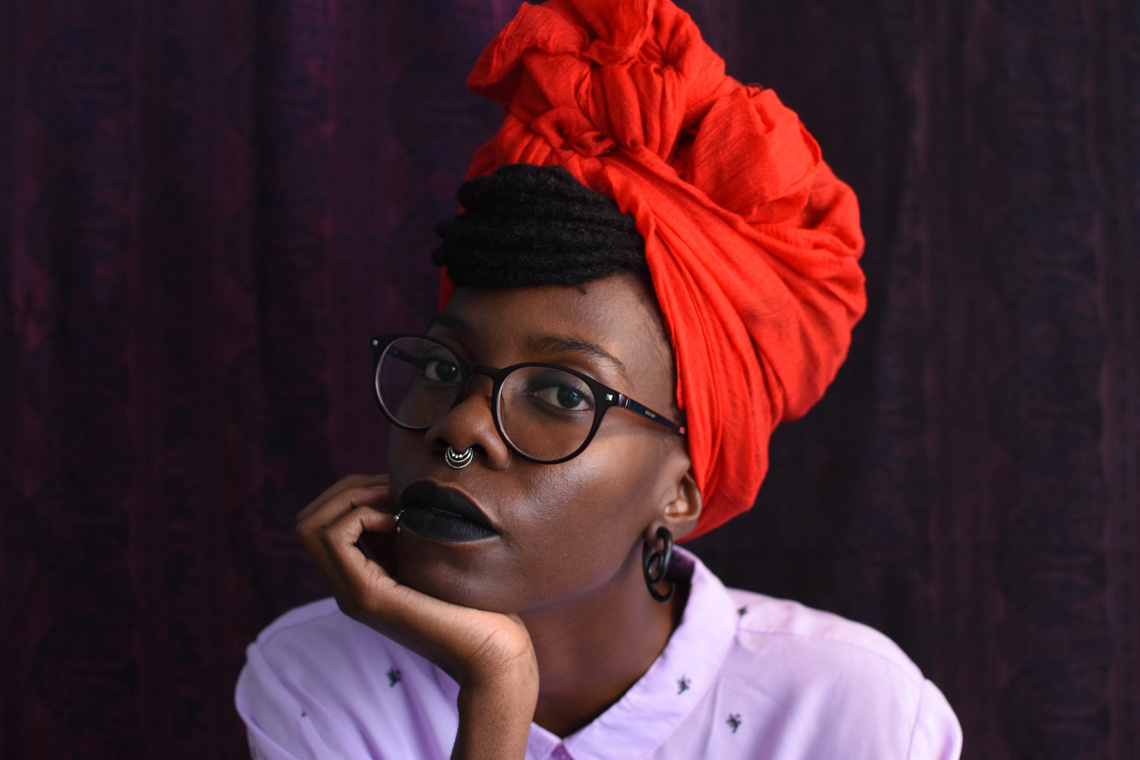 Masiyaleti Mbewe is a Zambian Afrofuturist writer, photographer and activist. She was raised in Botswana and is currently based in Namibia. She’s a former copywriter currently working as a freelance writer and activist.