Waste Management: We Cannot Recycle Our Way Out Of The Plastic Crisis

It is a widespread misconception: as long as we separate our waste into different types, we do not have to change our consumption patterns. But the reality is different: a large proportion of plastic waste is not recycled, much of it is incinerated or ends up in the environment.

Teaser Image Caption
Despite the hype, very little plastic is recycled in the USA. The US recycles less than one-tenth of the plastic waste it generates. Most goes into landfills.

Since the start of large-scale production of synthetic materials in the 1950s, 9.2 billion tonnes of plastic have been made. Only 24 percent remains in use, resulting in 6.3 billion tonnes of waste. No way has yet been found to deal with this waste without causing yet more problems. Packaging, which makes up 40 percent of all plastic waste, poses a particular set of difficulties. Most is designed to be thrown away after a single use, but it is extremely difficult to recycle as it is commonly made from multi-layered materials. On a global scale, 14 percent of plastic packaging is currently recycled—though this usually means “downcycling” to make an inferior-quality product. Another 40 percent is disposed of in landfills and 14 percent is burned in incinerators. The remaining 32 percent finds its way into the environment, including dump sites, rivers and the sea, or into the air we breathe.

Allowing plastic waste to enter the environment presents a myriad of environmental and health hazards—beyond the well-known visual blight of plastic bottles on our shores and bags and wrappers blowing along our streets. Originally derived from fossil mineral oil and gas, and mixed with hazardous additives, plastic has the potential to remain on the land or in the ocean for hundreds of thousands of years. In the sea, plastic litter threatens marine organisms, especially fish, seabirds, and marine mammals. On land, the health effects and other impacts of plastic gradually breaking down and seeping into the soil or entering food streams are still being researched.

Open burning is one way to get rid of plastic, but this simply releases carbon dioxide and many toxic chemicals that plastics contain into the atmosphere. In addition to dirtying the air we breathe, it is no secret that burning hydrocarbons is a leading contributor to climate change. Incineration takes the practice of open burning and does it at an industrial scale. Incineration facilities come in many forms, including “waste-to-energy” plants, co-incineration in industrial boilers and cement kilns, and “plastic-to-fuel” technologies such as gasification and pyrolysis. As with open burning, these solutions convert plastic waste into air pollution in the form of respiratory irritants, cancer-causing dioxins and furans, heavy metals including mercury, cadmium and lead, and major greenhouse gases. Even sophisticated pollution control equipment cannot prevent all pollutants from being released into the air. The captured pollutants are concentrated in the ash, which is sent to landfills or mixed in cement and other building materials. From there the pollutants can leach into the soil and groundwater. 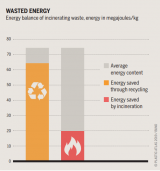 Incineration is also cost-prohibitive, both because of the massive investment and maintenance requirements, and due to the low efficiency of waste as a fuel and a constant demand for feedstock to keep the system operational. Solid-waste combustion is the most environmentally damaging industry in the US relative to the benefit it provides. Meanwhile it undermines recycling by consuming recoverable materials as feedstock and taking investments away from true renewable energy and zero-waste solutions.

While recycling is preferable to incineration, it too presents considerable economic and technical challenges. This is why only ten percent of all discarded plastic has been recycled. Different types of plastic require separate processing, and even the most advanced technology can recover only small amounts of material that is as good as new. Recycling usually produces low-quality mixed plastics that can be used only for low-value items such as the bases of traffic signs. The market for such products is restricted.

Manufacturers tend to prefer using virgin plastic rather low-quality recycled material. The rock-bottom price for new plastic, and the costly sorting and processing needed for plastic scrap, has led to much plastic waste from developed countries being shipped overseas. In January 2018, China, the main importer of such scrap, ended this practice, forcing the market to find other destinations for the waste. In the United States, Philadelphia is now sending its recyclables to be burned in the nearby city of Chester.

So-called “chemical recycling” is no better. This type of processing turns plastics into fuels and gases. But attempts to break scrap down into basic constituents that can be turned into new plastic have so far proved to be impractical at a large scale. Problems include the emissions, toxic by-products, and high energy consumption. Attempts have been dogged by high-profile failures, fires, explosions and financial losses. The US Environmental Protection Agency thinks that such processing poses similar health risks to conventional waste incineration.

All the current processes to use waste plastic in other ways lag far behind the huge volumes of new materials being generated. As consumption continues to grow, even high-quality recycling cannot diminish the amount of oil and gas being pumped to make new plastic. The most effective way to reduce the damage caused by plastic after its useful life is over would be to reduce the flow at source. The first step must be to eliminate single-use plastic items.