Food Systems on the Edge

Those most affected by the negative consequences of large-scale industrialized food production must play a vital part in discussing how to transform it. The world, therefore, needs a people’s Food Systems Summit that aims to end hunger and malnutrition, protect ecosystems, and provide small farmers with a decent livelihood.

The COVID-19 pandemic has ruthlessly exposed the global food system’s deficiencies, and a massive escalating hunger crisis now looms. A quarter of humanity lacks secure access to food, with one in ten people affected by severe food insecurity, and up to 811 million people hungry. Another quarter of the world’s population suffers from various forms of malnutrition, including obesity, with huge negative effects on health.

Both trends are on the rise, and both are directly connected to injustice and poverty. No matter how much food the world produces, failure to address power imbalances in the global food system will mean that hunger persists and foodborne illnesses explode.

Many hope that the United Nations Food Systems Summit in September will be a catalyst for real change. But the gathering is more likely to legitimize and cement the current inequitable model of industrialized food production.

That would be bad news for the world’s hungry people, the majority of whom – 418 million – live in Asia. More than 282 million live in Africa, where chronic hunger affects one in five people and is increasing faster than in any other region.

Hunger is primarily a problem of accessibility. People go hungry not because there is insufficient food in the world, but because they are poor. Were it not for injustice and inequality, the record global wheat production in 2020-21 could in theory feed up to 14 billion people. But agricultural products go to those with the greatest capacity to pay – including in the feed industry and the renewable-energy sector – and not to the most vulnerable people. Market power trumps food sovereignty.

Violent conflict, extreme weather due to climate change, biodiversity loss, and the economic turmoil caused by COVID-19 lockdowns have worsened the situation of vulnerable people. And water becomes increasingly scarce for smaller farmers when bigger investors use it in intensive irrigation schemes.

All these crises limit poorer people’s capacity to buy food or produce enough to be self-sufficient. As a result, 155 million people across 55 countries suffered from severe hunger in 2020, an increase of 20 million from 2019.

Since the Green Revolution in the 1960s and 1970s, we have continuously heard that increasing agricultural productivity is the key to fighting hunger and feeding the world’s population. Today, global corporations like Corteva (formerly the agricultural unit of DowDuPont), Bayer/Monsanto, and ChemChina/Syngenta promote productivity through the use of chemical pesticides, artificial fertilizers, and genetically modified or commercially grown hybrid seeds that cannot be reproduced. But such capital-intensive agriculture cannot serve those who lack the basics for secure food production: land, water, and regionally rooted knowledge systems.

Unhealthy diet is often a consequence of poverty

Meanwhile, nearly two billion people globally are now overweight or obese. Mexico, where about 73% of the population is overweight, is a particularly worrying case. If current dietary habits persist, 45% of the world’s population could be overweight by 2050. This will result in exploding health-care costs, with diet-related health costs linked to mortality and non-communicable diseases projected to exceed $1.3 trillion per year by 2030.

Again, powerful economic interests are fueling this trend. The food and beverage industry profits greatly from selling unhealthy processed food and sugary drinks. After all, fat, sugar, and carbohydrates mixed with a lot of salt are the cheapest calories. In 2019, the world’s five largest food and beverage companies – Nestlé, PepsiCo, Anheuser-Busch InBev, JBS, and Tyson Foods – had a combined revenue of $262.7 billion.

Healthy diets are much more expensive, so obesity is often a result of poorer populations’ low purchasing power. The UN’s Food and Agriculture Organization estimated that a diet with sufficient calories costs $0.79 per day in 2017, whereas a diet with sufficient nutrition costs $2.33 per day, and a healthy diet costs $3.75 – making it unaffordable for more than three billion people.

We need a different food system

Scientists around the world have proposed future food systems that protect the health of both humans and the environment. The EAT-Lancet Commission, for example, has shown that it is feasible to provide a healthy diet for ten billion people by 2050 without destroying the planet. The panel advises doubling consumption of fruits, vegetables, nuts, and legumes, and reducing red-meat and sugar consumption by more than 50%.

What is missing are political leaders who understand the urgency of the food-system crisis and initiate the necessary transformations. In doing so, they should stand up to powerful economic interests and focus on the needs of the most vulnerable.

The pandemic has accelerated demands for a more resilient, diverse model of farming and food production. Grassroots initiatives based on community decisions and open-source ideas can help to develop local food systems that are free from corporate capture, such as community kitchens, nutrition centers, and urban farming initiatives. About 300 urban farms influenced dietary choices in Johannesburg, South Africa in 2020.

Unfortunately, the upcoming UN Food Systems Summit looks set to entrench the status quo. The agenda gives little room to crucial structural issues rooted in power imbalances and the political economy. And the industrial agriculture lobby may well seek to water down discussion of important scientific themes on the agenda, including access to locally adapted seeds, the consequences of highly hazardous pesticides, and land and water regulation.

What we need is a people’s Food Systems Summit that aims to end hunger and malnutrition, protect ecosystems, and provide small farmers with a decent livelihood. Those most affected by the negative consequences of our current food systems should play a vital part in discussing how to transform them.

The text was first published at Project Syndicate. 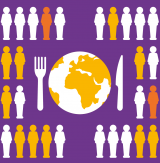 It is possible to create sustainable, just and healthy food systems. For this to happen, it is key to strengthen political structures that truly focus on the right to food, on healthy nutrition, and on protecting biodiversity and the climate. Read more here

Nigeria’s food security situation is characterised by the threat of hunger and poverty, which confronts the 69 percent of the population that lives on less than Naira 100 (US$ 0.7) per day.Smallholder farmers account for 80 percent of all farm holdings, but crop yields are far below potentials. This is due to inadequate access to and low uptake of high quality seeds and inefficient production systems, leading to regular shortfalls in production.
By Professor Chinedum Nwajiuba

Nigeria’s 160 million people are projected to increase to 255 million by the year 2030. With desertification in the north, erosion and sea level rise along the Atlantic coast and more floods, will Nigeria be able to feed itself? With almost half of the country’s arable land not cultivated, there is a real possibility to increase food production. But how should Nigeria’s future agriculture look like? Green Deal Nigeria author Prof Chinedum Nwajiuba argues that sustainable agriculture is possible if small farmers are not left behind.
By Professor Chinedum Nwajiuba