Between Self-Organisation and Government

The lack of municipal service delivery is an everyday reality for millions of residents in Nigerian cities. However, through invention and interaction, residents from densely populated, low- and lowest-income communities establish their own networks and procedures to address basic needs.

In the following papers, researchers observe how networks and neighborhoods in low income communities in Kano, Onitsha and Lagos organize access to clean water and they assess the level of legitimacy, accountability and gender-inclusiveness of the various stakeholders. They give recommendations of how the local actors and their interrelations can be encouraged and strengthened so that interventions from state governments, private sector or international development partners will have more acceptance and impact in future. The papers raise a number of questions that must be addressed if Nigerian cities really want to embark on a resilient and inclusive development path.

Currently, state and local government institutions largely fail to provide basic services, in this case public water, as a common good. Public water does not play a relevant role in any of the three cities. Hence, the efforts of alternative governance structures such as CDAs and or traditional institutions need to be closely examined.

Traditional leaders, who represent their communities should ensure access to services, e.g. by providing water as a “gift” - but they are also not rising to the occasion. Their effectiveness is currently measured against personal integrity, commitment and goodwill rather than transparent procedures meant to hold them accountable. With growing urbanization and an increasing absorption of citizens from other parts of the country and West Africa, it will be a challenge to (re)invent procedures through which traditional leaders can meet the expectations of increasingly diverse communities.

This calls for an open and inclusive discussion of how traditional leaders (and their councils) can interpret and fulfil their roles beyond longstanding traditions of their own communities. It also raises the question of a mainly patriarchal system that excludes women from decision-making roles. New models for traditional leadership need to be tried and promoted. For example, the internal structure of Community Development Associations (CDAs) as defined in the local government frameworks would offer women equal opportunities to participate in decision making and implementation. This should be more deliberately pursued and operationalized.

From a Western perspective, which embraces alternating leadership through transparent election processes as a key principle of democracy, a traditional hereditary leadership system should have no role to play in a modern city government. The research reports indicate that local communities, on the contrary, often consider elections as main causes for friction and as being prone to outside influence, especially from the ruling parties. Hence, community and neighborhood leaders are accepted as long as they show commitment and integrity. Provisions for replacing leaders who do not perform exist – in contrast to the traditional leadership structure – even if this does not happen through election processes but rather through other forms of common consensus building.

What role is left for government, currently the overshadowing “father figure”? According to the researchers, it should limit itself to a regulatory role ensuring universal accessibility, affordability and health standards. State and local governments could perform best if they were prepared to learn from the communities, adopt their best practices and suggestions while integrating these ideas into policy formulation and implementation strategies. 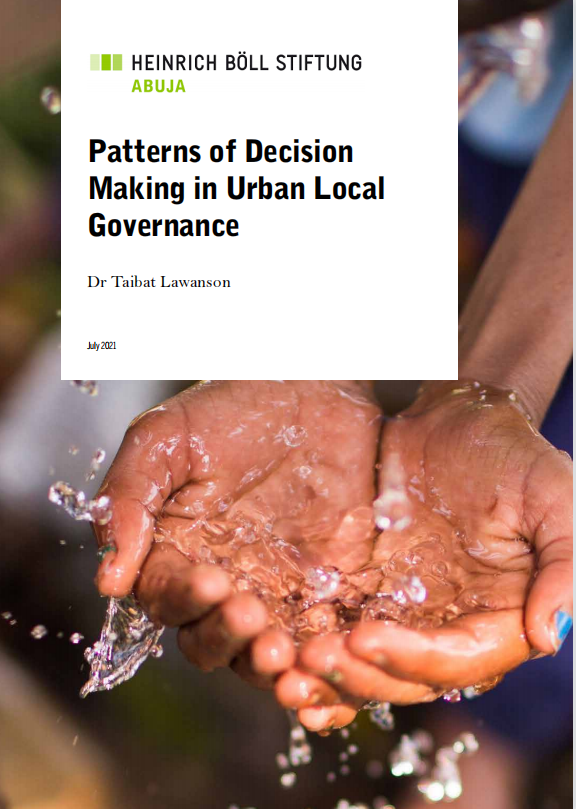 The paper gives an overview of the challenges of local governance in Nigerian cities and recommendations towards better urban futures.
pdf

The water sector is a highly politicized environment, with recurrent tensions between those who see water as a commodity and those who see it as a public good. 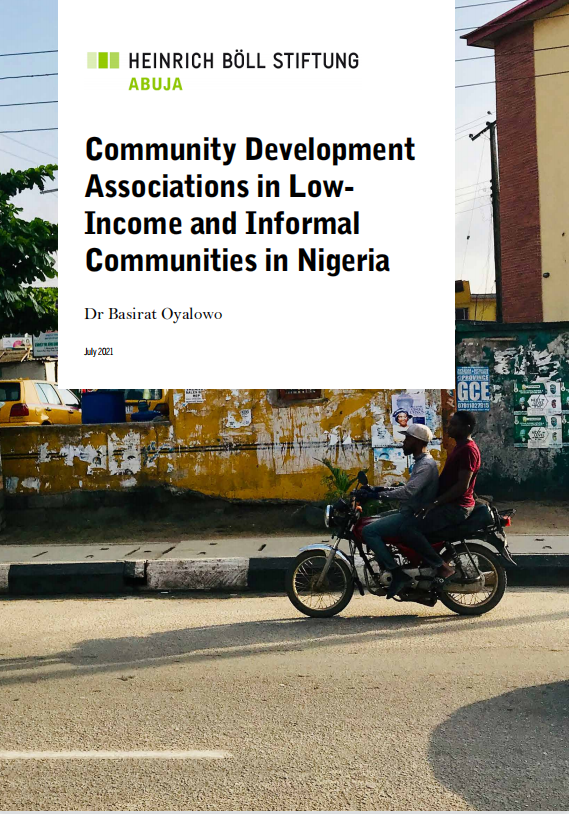 The paper explains how Community Development Associations (CDAs) could fill the vacuum in local urban governance created by the dysfunctionality of the third tiers of government in Nigeria, the local governments.
pdf

CDAs are meant to support the LGs as mechanisms for mobilizing and integrating the grassroots into the fold of democratic governance in Nigeria in order to facilitate enhanced service delivery and higher quality of life. 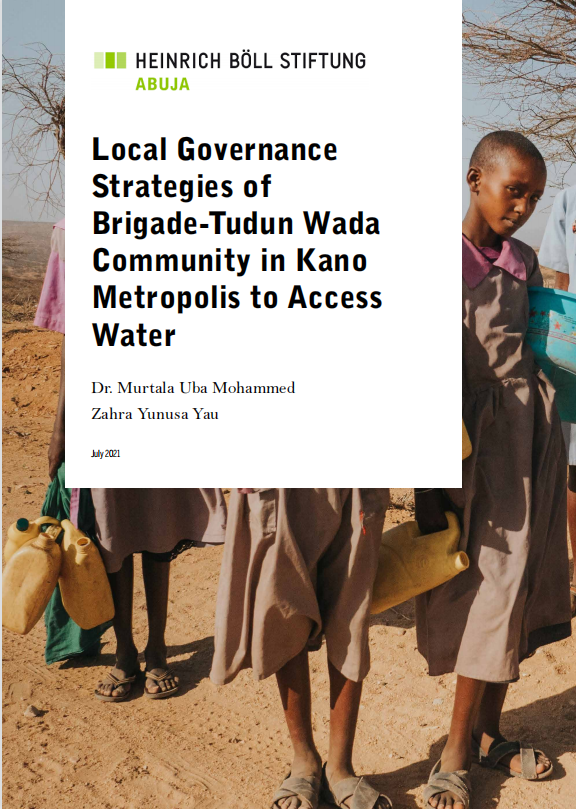 This study reveals how Brigade-Tudun Wada community in Nassarawa State is able self-organize to access water even after the community stopped getting water from the public tap system more than two decades ago.
pdf

Many people venture into the water-vending business by sinking wells and boreholes without any permission. A water reform bill that would regulate the sinking of boreholes by the state ministry and its agents, which was introduced two years ago, has yet to be passed into law by the state assembly. 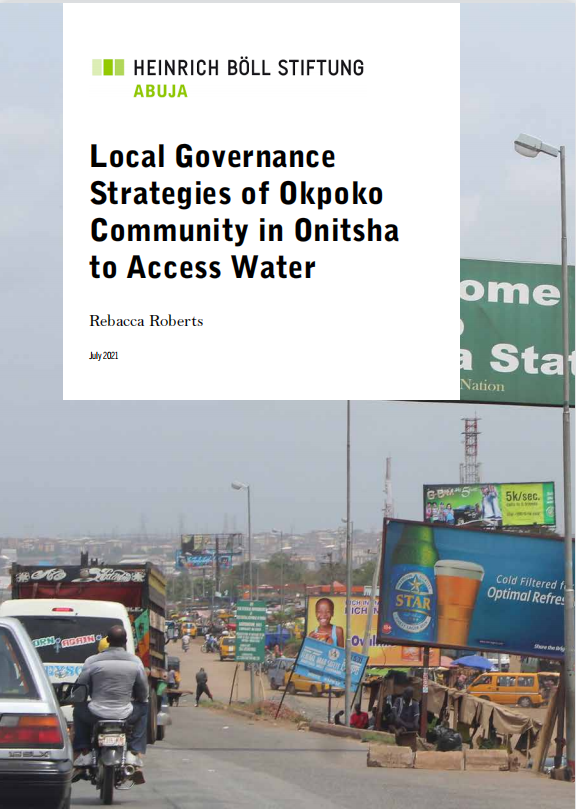 This study focuses on the dimensions of traditional and governmental urban processes in Onitsha, Anambra State, using access to water as a case example.
pdf

The community itself has proven that it is able to sustain a self-organized water supply, as shown by the revitalized access they achieved with assistance from the churches. 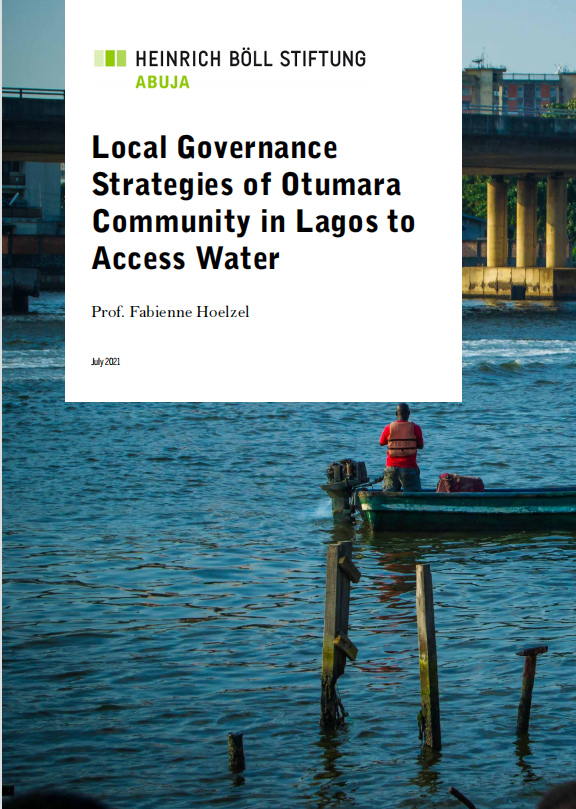 This report analyses the provision of urban services in the low-income community of Otumara, Lagos, with a focus on water supply, examining the relevant actors, actor constellations and modes of interaction.
pdf

The starting point for improvement lies in a practical-normative orientation to urban planning and urban governance based on “what works”, and not on an “ideal” technical-instrumental orientation.