Recycling: Not Business as Usual

Recycling will never be able to solve the problem of the rapidly expanding volume of plastic waste in our environment. However, it is necessary to improve and organise the industry that supports thousands of livelihoods in the informal sector.

Teaser Image Caption
Estimates by the Lagos Waste Management Authority suggest that plastic accounts for 10 to 15 percent of municipal solid waste. Packaging is the leading cause of plastic waste generation.

Like most countries across the world, the scale of recycling is minimal in Nigeria, compared to the amount of plastic waste produced. Less than 10 percent of plastic waste is currently being recycled. Although awareness and education about recycling as a waste management tool is growing, the practice is largely confined to a few states in the South West region of the country such as Lagos, Ogun, and Oyo and in the middle belt such as the Federal Capital Territory of Abuja.

Recycling begins at the collection phase, after which the waste materials are sorted and processed into materials that can be used for manufacturing. Historically, only few local players used to process plastic waste, such as polyethylene terephthalate (PET) that is retrieved from plastic soda bottles to produce, for example, fibre for textiles. The majority of the plastic waste collected in Nigeria used to be exported to other countries such as China to be processed and turned into raw materials especially in the textile, pipes and carpets industries, among others. However, China placed a ban in 2018 on the importation of waste materials from other countries creating more opportunities for local recycling companies.

Many businesses operating in the sector have been set up as social enterprises. One of these is Wecyclers, which runs a rewards-for-recycling platform based in Lagos that incentivises people in low-income communities to capture value from recyclable waste. They accomplish their objectives using a fleet of relatively cheap and locally assembled cargo bikes called “wecycles”, which the collectors use to pick up recyclable waste from households and deliver the materials to their collection, sorting and processing hubs around Lagos. When households deliver plastic materials, they receive points per kilogramme of recycled waste, which they can exchange for money to purchase essential goods such as food and household items.

Though recycling activities are growing and evolving daily, the industry is facing a number of challenges due to the following factors: lack of public awareness about the recycling value chain; an inadequate collection infrastructure especially in remote locations; high cost of logistics including transportation; lack of finance; and inadequate implementation of the Extended Producer Responsibility (EPR) programme, a policy placing responsibility on producers to manage the lifecycle of their products. However, any capital and infrastructure investments into recycling operations in Nigeria should not only lead to a growth in market size and capacity but also ensure that the industry meets higher environmental and social standards. Informal recycling supply chains tend to be exploitative with waste pickers receiving unfair prices for the plastic waste that they collect. A lack of market transparency allows middlemen to buy at very low prices and sell at higher prices, leading to inequality along the supply chain. Another issue is the fluctuation in the price for discarded plastic that affects what the waste pickers receive. But most importantly, waste pickers and informal recyclers should be empowered to move up from the bottom of the supply chain. This not only means creating access to education in form of financial literacy and other social services but also that their voices are heard in relevant policy reform processes.

Recently, the Federal Ministry of Environment developed a National Policy on Plastic Waste Management specifically to address plastic waste and recycling operations in Nigeria. This document, which went through a stakeholders’ review process, should be localised to involve community participation. The implication is that if not all relevant stakeholders are involved in the development of these policies, implementation will be challenging. 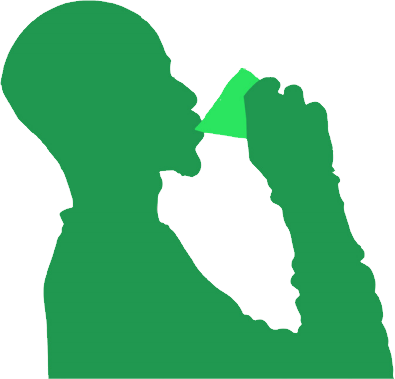 The history of sachet water production in Nigeria dates back to 1994 when DIL Pure Water was introduced into the market by Deagbo Industries Limited based in Ibadan, Oyo state. Before then, chilled water was hawked in bread nylon bags and returnable bottles, which captured a fair share of the market relative to Swan Table Water, Nigeria’s pilot brand of bottled water launched in 1981. Because of market competition, many water vendors soon settled for disposable polyethylene sachets, which cost less to produce and appeared to be more hygienic and convenient than nylon bags and returnable bottles. Aside from meeting the public’s need for potable drinking water, sachet water popularly known as ‘pure water’ also began to serve as a veritable solution to households’ other clean water demands in Nigerian cities.

Due to the poor performance of government waterworks because of widespread pipe leakages, contamination of piped water and general operational inefficiencies, pure water assumed an innovative status and was endorsed by the National Agency for Food and Drug Administration and Control (NAFDAC) in 2000. Owing to its affordability, in time, the industry grew exponentially. The annual turnover of the industry has been estimated in excess of 20 billion Naira. In 2017, NAFDAC reported that Nigerians consumed 10 million sachets of pure water daily.

However, empty water sachets are considerably contributing to environmental pollution. For the most part, they end up in landfills, drainage systems, or water bodies. A 2014 review of urban flood risk management efforts in Lagos identified pure water sachet, among other drain clogging materials, as a major causal factor of flooding in the metropolis. Though there are some laudable initiatives to recycle plastic waste, the volume of waste produced outweighs the capacity to efficiently manage the problem. Although there is no available record of pure water sachets collected, judging by the fact that collectors are usually paid per kilogram, it is likely that many of them would opt to collect heavier items like glass bottles, PET bottles, plastic chairs and kegs, aluminum cans, or cartons, rather than lightweight items like pure water sachets with little economic incentive.

Amidst the proliferation of sachet water factories in Nigeria, there also have been numerous concerns about the hygienic conditions under which water is packaged, distributed and sold. A 2009 study to ascertain the bacteriological quality of packaged water revealed that about 40 percent of the samples obtained from distributors from across the country had contaminants that posed a potential threat to public health.

As long as the inadequacy of public water supply, which created the demand for packaged water in the first place in urban, semi-urban and rural areas of Nigeria, persists, and no effective reward scheme is created, the damage from pure water sachet waste will continue to mount.

A world without plastic pollution is a vision worth fighting for. The Plastic Atlas provides facts and figures about a world full of plastics.

This is a chapter from the Plastic Atlas Nigeria.